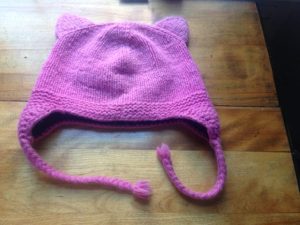 At the Christmas market in Bryant Park,  my favorite shop is the one with wool goods from the Himalayas. When I saw this hat there, a few Decembers ago, I was smitten. It became my new favorite, my go-to winter hat.

Pink is not a color I wear much, nor do I favor hats with ears. But I love this hat! So silly, so distinctive, it brightens the darkest winter day. Dorkily large, it does not squeeze my head and  is lined with non-itchy polar fleece. The earpieces hang down like crazy Regency sideburns or those protective pieces on Viking helmets. I love my hat. 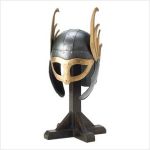 The other night I met up with a friend. “Oh, you’ve got one of those hats!” she said. I looked at her, perplexed “The pussy hats. You know. For the march.” I did not know — and yet. I was aware of the pussy bow kerfuffle. My sense, lately,  that people had been looking oddly at my hat — I’d told myself I was imagining things, but maybe I hadn’t been.

“I’ve had this hat for years,” I said. When I got home, I looked it up.  She was right of course.  First I laughed. My dorky pink hat had become a political statement! Then I paused. Could I keep wearing it? What would Jane Austen do?

I  sympathize with the goals of the thousands of women intending to march on Washington on January 21 wearing fuzzy pink hats with ears. But I won’t be there. I work at a news organization;  I cannot march, put political bumper stickers on my car (not a problem since I don’t own one) or campaign signs in my yard (likewise). I can’t donate to political groups or sign petitions.  These rules might strike an observer as ridiculous, particularly in this hyper-partisan moment; a fig leaf over the naked liberal bias of the MSM.  But I  follow them, as do my colleagues. And now despise us if you dare.

By 1815, the Prince Regent, the future George IV, was notorious for gluttony, extravagant spending and openly cheating on his wife, who in all fairness does not seem to have been that great a person either. But he was a patron of the arts, and to his credit, an admirer of Austen’s novels.

She hated him, which we know because she said so in a letter to her friend Martha Lloyd in 1813.

So how did “Emma” end up being dedicated to the prince? Jane Austen’s  brother Henry fell seriously ill in the fall of 1815 and  consulted a physician the prince also  employed. The subject of Austen’s novels must have come up, and Henry did not fail to mention that his sister, staying with him at the time, was the author. (She published anonymously, but it seems to have been an open secret by then.) Word got back to the prince, who instructed his royal librarian to call on the lady authoress and invite her to tour the library at Carlton House, the princes’s monument-to-excess London residence.  While she was there, the librarian, Mr. Clarke, informed her she was “at liberty” to dedicate her next work to the prince. Jane Austen appears to have been unsure how to take this. She  wrote to Mr. Clarke:

SIR, — I must take the liberty of asking you a question. Among the many flattering attentions which I received from you at Carlton House on Monday last was the information of my being at liberty to dedicate any future work to His Royal Highness the Prince Regent, without the necessity of any solicitation on my part. Such, at least, I believed to be your words; but as I am very anxious to be quite certain of what was intended, I entreat you to have the goodness to inform me how such a permission is to be understood, and whether it is incumbent on me to show my sense of the honour by inscribing the work now in the press to His Royal Highness; I should be equally concerned to appear either presumptuous or ungrateful.

One can only imagine what she must have felt. The prince was a horrible person,  undeserving of her respect — and he was the prince, the most powerful person in England. This was an honor! An honor she probably could have done without. There is scant evidence Jane Austen was a toady or a celebrity-chaser;  earlier she’d turned down a chance to meet Madame de Stael. And yet. She  did it — she dedicated “Emma” to the prince. She pointedly mentioned the royal dedication to her publisher, in the hopes of getting them to speed up production; she wasn’t blind to the realities of the world, to the influences of fame and power. To the way things work. Likewise, though her view of the equality of women is clear in every word she wrote, she was never overtly political or polemic.

So what does this story have to do with my hat?   It’s made me  realize that what looks like craven collapse from one angle can seem like realpolitik from another, and that I must put my favorite away for a while, until a hat can again be just a hat. To find other methods of resistance, more subtle but no less effective. It feels like a long walk in a dark place, undertaken pink-hatless.

One thought on “When Hat Becomes Statement, What Would Jane Austen Do?”