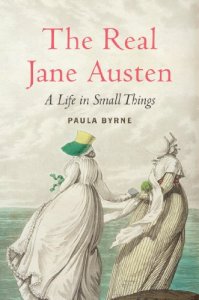 Like many people, I am a huge fan of Lucy Worsley and could watch clips of her on YouTube for hours. She has a genius for bringing history to life with her stunts, her costumes, and her general way of being in the world, which one writer has memorably compared to  “a possessed Christopher Robin.” So I was a little surprised to wake up and learn from my Jane Austen Google news alerts that she has been accused of plagiarism.

An article in Private Eye cites numerous examples of similarity in phrasing and content between Ms. Worsley’s new book,  “Jane Austen at Home” and Paula Byrne’s  2014 work, “The Real Jane Austen: A Life in Small Things.”

One does not know what to think about this. For me, the dismay that Ms. Worsley might have done this was tempered a bit by the tone of nastiness pervading the (anonymous)  Private Eye article. Clearly not everyone is a fan, and it appears some people have been sharpening the knives for a while, waiting for such an opportunity. When you think about everything that Ms. Worsley has going on, it’s not surprising that she would rely heavily on the work of other historians — probably more accurate to think of her less than as a historian doing original research, more as one who popularizes history. It’s a job she’s amazing at and has has brought delight and education in equal parts to many, many people.

Lucy Worsley is a huge brand. Jane Austen is a huge brand. The temptation to bring these two together in a book has to have seemed like a can’t-miss idea. But the people involved should have been aware of the extra level of scrutiny that would accompany such a project. Even the most inadvertent borrowing is going to be noticed.

For my part, I hope the positive result of this contretemps is to bring more notice to the excellent and prolific Paula Byrne (who graciously blurbed my novel, although we are not otherwise connected). I’ve really enjoyed and learned a lot from both her books on Jane Austen, and her “Perdita” is sitting on my shelf, still unread, but calling to me.