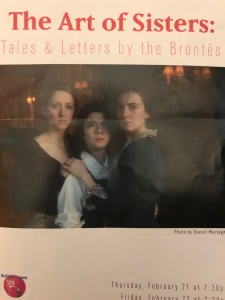 Jane Austen and the Brontës had a lot in common, as clergymen’s daughters, educated but poor, geniuses in a world with little use for brilliant women. Charlotte was famously dismissive of Austen – “the Passions are perfectly unknown to her.”

But what would Austen have thought about them?

The theater-lover in her at least probably would have enjoyed a recent performance I saw: “The Art of Sisters: Tales & Letters by the Brontës,” which dramatized scenes, real and imaginary, evoking their turbulent lives.

One early one, based on a diary paper, hints at their unconventional childhood. Emily (Miriam Canfield, who also directed and adapted) gleefully summarizes a most un-Victorian domestic chaos: “It is past twelve o clock and Anne and I have not tidied ourselves, done our bed work or done our lessons and we want to go out to play …The kitchen is in a very untidy state…”

A decade later, Charlotte (Alida Rose Delaney) is back from Brussels and writing to Constantine Heger, her teacher and unrequited love object. Charlotte’s powerful feelings would soon be channeled into fiction, as we see in the proposal scene from “Jane Eyre,” with Delaney transformed into Jane.

There’s the momentous 1845 episode when Charlotte happens across Emily’s poetry. Emily is outraged by this invasion of privacy, while Anne (Katrina Michaels), ever the peacemaker, pipes up: “Charlotte! I’ve written some poems, too!”

Their novelistic imaginations take flight as Canfield becomes Cathy from “Wuthering Heights,” explaining to a hilariously unsympathetic Nelly Dean (Michaels) why she’s marrying Edgar Linton despite loving Heathcliff.  Michaels, as Mrs. Graham of “The Tenant of Wildfell Hall,” decries the double standard of how sons are raised versus daughters.

Back in the real world, their father, Patrick (Stuart Rudin), relates how he was oblivious to the literary goings-on in the parsonage until Charlotte reveals she’s secretly the author of the biggest novel of 1847 and gives him a copy to read. “Children, Charlotte has been writing a book!” he informs the presumably amused Anne and Emily.

But happiness is brief: Emily succumbs to tuberculosis, then Anne. Their deaths are harrowingly dramatized through one of Emily’s poems and Anne’s letter expressing a wish to live longer and do some good in the world. The tall and versatile Marshall Taylor Thurman – already a silent Heger, a scowling Heathcliff, a manipulative Mr. Rochester and a mansplaining Gilbert Markham – reappears in bare feet and a holey sweater to personify Death, brutally claiming Emily and sweeping Anne off gently.

The performance’s intimate setting, a Beaux-Arts townhouse owned by the American Irish Historical Society, brought home an aspect of the Brontës often overlooked but useful to understanding them: the Irish thing.

Early in the performance, Patrick outlines his remarkable story. Growing up on a farm in Ireland, with a love for books, he started his own school at age 16, worked as a tutor in a gentleman’s family, and went to Cambridge University at 25, becoming a minister in the Church of England. This rise from rural obscurity testifies to his intellect and energy, traits his daughters inherited.  Yet as a gentleman by education but not birth, in an England that regarded the Irish askance, he remained an outsider always. This was part of his daughters’ legacy too. Charlotte would go through life with a chip on her shoulder, while Emily was indifferent to what people thought, and Anne blazed with quiet outrage at the world’s injustices.

It’s all very far from Austen’s evasive irony, her decision to let other pens dwell on guilt and misery. But I have to think she would have admired their courage at least, so different from her own yet breathing something of the same air, faced with the same sort of obstacles.

One thought on “Dramatizing the Brontes: “The Art of Sisters””